STLMade: The Power of Plants

Mónica Carlsen, a Venezuelan immigrant and plant biologist with the Missouri Botanical Garden, is inspiring the next generation of budding scientists through internships and educational collaborations with local institutions.

For Mónica Carlsen, Ph.D., there is something about being in the presence of plants that transcends human interaction.

“I see beauty in the shapes, in the colors of the flowers, in the smells of the flowers,” says Carlsen. “If I don’t get to touch my plants and see my plants, I definitely feel down, like something is missing. I just feel the connection with the plants is my end goal. That’s what I want to do; there is nothing else.”

As a plant biologist and assistant scientist at the Missouri Botanical Garden, Carlsen’s research focuses on plant systematics. She studies plants, particularly in the tropical regions, and how they’re related, how new species of these plants can be discovered and how to preserve them.

She has even discovered new species of plants herself, including at least seven that she and her advisor found in a tiny forest in Ecuador. They brought the species back to the lab, studied the DNA of the plants and got to name them.

“If we find some species that are very rare in the wild, we target those species first because they will need more of our attention,” says Carlsen. “They will go extinct faster if we don’t take care of them.”

Before Carlsen moved from her home in Venezuela to attend graduate school at the University of Missouri–St. Louis, she was completely unfamiliar with St. Louis, but she was aware of the Missouri Botanical Garden. She had seen the esteemed institution’s name many times on specimens in the herbarium where she worked during her undergraduate studies. When the time came to apply to graduate programs, she only applied to UMSL because she knew it had a partnership with the Garden.

“It was the only thing I knew about St. Louis or the Midwest, but I knew that I wanted that connection with the Garden, and that’s why I chose St. Louis,” she says.

Inside the Garden’s world-renowned Climatron, Carlsen feels like she is back in the garden outside her home in Venezuela, among the plants she knows. The first geodesic dome to be used as a conservatory, the Climatron’s 24,000-square-foot interior recreates the environment of a tropical rainforest and boasts 1,400 different tropical species among its more than 2,800 plants.

Carlsen hopes to extend her conservation efforts further by bringing more students into the field of plant science. In addition to her own research, she oversees the education programs and the internships for undergraduate students across the research division of the Garden. Her goal is to get as many students from local universities and universities across the country to the Garden to experience what it means to be a plant biologist.

While many of the St. Louis region’s higher educational institutions offered degrees in biology, none of them had previously been connected to the Garden at the undergraduate level. To Carlsen, this seemed like a missed opportunity. With funding from the Smithsonian Institute for Biodiversity Genomics, she created a new internship program to gather and preserve DNA samples from gardens around the country and bring students to the Garden to collect those samples and learn about plant identification.

“We had tons of students taking biology or a plant biology class in the classroom, but they never came to the Garden and they never actually experienced what it is to be a plant biologist for a day or a week or a month,” she says.

The program started with local college students during the spring and fall semesters. When those students left over the summer, they were able to expand the program beyond St. Louis, bringing in 10 to 12 students from across the U.S., particularly from institutions that didn’t have the resources to do research on their own. The National Science Foundation sponsors the 10-week summer internship.

“For most of them, they end up realizing that this is a career path and they can actually do this for living, and they continue their degree into a master’s or a Ph.D. in biology in general, or sometimes in plant biology,” Carlsen says. “I always say that if we can put that little seed of a scientist in kids, we will have a lot of good scientists out there.”

“The Climatron is my connection to the tropics,” says Carlsen. “A lot of people, a lot of students come here to the U.S. that are from tropical countries in Latin America, Asia or Africa. They want to feel that sense of home, and when they enter the Climatron, that’s what they feel.”

She has already seen the program pay off with three different students that came from other institutions across the country working toward their doctorates in plant biology in universities in St. Louis because of their connection with the Garden.

Carlsen also brought the Living Earth Collaborative Summer Research Internship Program to the Garden. The exciting collaboration brings the Garden together with Washington University and the Saint Louis Zoo to create an academic center that aims to further the study of biodiversity.

“The idea is to make connections between the three institutions and the research that we do, bringing students from the undergraduate and graduate level to be part of these connections,” she explains. “Sometimes we see people as plant people and animal people, when we really study the same things. If a plant is in danger, probably the animals that live in those forests are also in danger, so we can collaborate that way and figure out, if the whole ecosystem is in danger, what can we do about it?”

Conservation is at the forefront of Carlsen’s work and a cornerstone of the Garden’s overall mission. While most visitors come to take in its seasonal beauty or attend one of its signature events or exhibitions, many don’t realize that the Missouri Botanical Garden has one of the largest collections of plants, both live and preserved, in the U.S. It serves as a primary resource for researchers around the world looking to study a specific plant.

“That’s something that is rarely seen in botanical gardens,” Carlsen says. “Botanical gardens are mostly places of displays of plants and probably education, but the research and the conservation components are two add-ons that very few institutions similar to us have. We have had a history of doing these for almost 200 years now.”

Once a year, the Garden hosts an open house in its research building where the plant biologists get to show their projects to the general public for one weekend. Carlsen loves having the opportunity to pull back the curtain and share the work she and her team are doing every day to further conservation efforts. She encourages everyone to come see and learn and take in the natural beauty that lies within the Garden’s gates.

“It’s something that perhaps we don’t like to show off, but we should,” says Carlsen. “I think we should definitely let the public know how good and how important the Garden is, not just in St. Louis, but also in the community and the international community around the world.” 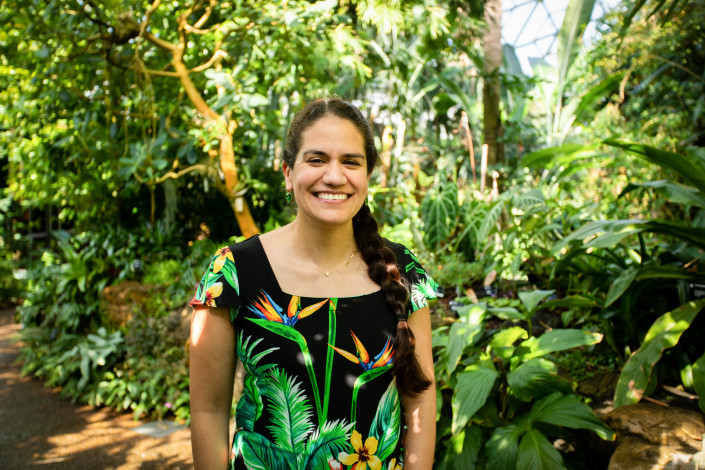