STLMade: Start Up, Stand Out, Stay

Besides the affordable cost of living and an array of appealing jobs, St. Louis offers a certain sense of community that you can’t find in many metropolitan areas.

Last year, LinkedIn named the top 15 U.S. cities to launch a career. “What you won’t find on this list are the traditional coastal job magnets—New York, the Washington, D.C. area, the San Francisco Bay Area, and Los Angeles,” noted the popular career site. “Those cities may still offer some of the highest starting salaries, but their sky-high rents mean income doesn’t stretch nearly as far.”

“In top-ranked St. Louis, annual gross pay in the types of jobs that recent grads are likely to land is just a touch over $60,000,” the site found. “Typical rent averages $11,900 a year, or slightly less than $1,000 a month. That makes St. Louis a strikingly affordable city in which to start a career, with rent consuming just 19.7 percent of gross income.”

Besides the affordable cost of living and an array of appealing jobs, St. Louis offers a certain sense of community that you can’t find in many metropolitan areas. As All Black Creatives co-founder Darren Jackson explains, “The value of living in St. Louis is unmatchable. Any other city, you can’t get this type of community. St. Louis is so small in the best way.”

Leaders from some of the region’s largest organizations take time to help those who are just starting out. World Wide Technology, for instance, works closely with local schools and nonprofits. And Square co-founder Jim McKelvey started LaunchCode, a nationally acclaimed program that provides tech training and support to those without a college degree. These efforts, alongside such regional initiatives as STL.Works and NPower, are fostering equity in a region full of opportunities for skill training and continuing education.

Of course, that’s not to mention other aspects of life in St. Louis. The region offers no shortage of big-city draws, without the cost and congestion of larger metro areas. The region has received national acclaim for its schools and universities, restaurants and breweries, world-class musicians and artists, sports scene and family attractions, renowned hospitals and abundant green space.

And it just keeps getting better. In 2023, St. Louis CITY SC is set to kick off its inaugural season in a state-of-the-art stadium not far from the champion Blues and Cardinals. That same year, a $175 million expansion and facelift on America’s Center convention center is slated for completion. Nearby, the $1.75 billion National Geospatial-Intelligence Agency’s new campus will mark the biggest federal investment project in the history of the city, and local universities and innovation hubs are amplifying the region’s position as a leader in geospatial technology. New entertainment options—City Foundry and the Armory District in Midtown, The District in Chesterfield, Riverpointe in St. Charles—are also offering new entertainment destinations. And winding through the region, connecting it all, are the more than 128 miles of Great Rivers Greenway’s trails and the forthcoming Brickline Greenway.

While we could go on, this publication, created by SLM Media Group and STLMade, provides just a snapshot of all the region has to offer. It’s made possible in partnership with Greater St. Louis, Inc., the Regional Business Council, and Explore St. Louis.

As LinkedIn found—and you’ll soon discover—there are myriad reasons that St. Louis is an ideal place to start up, stand out, and stay. 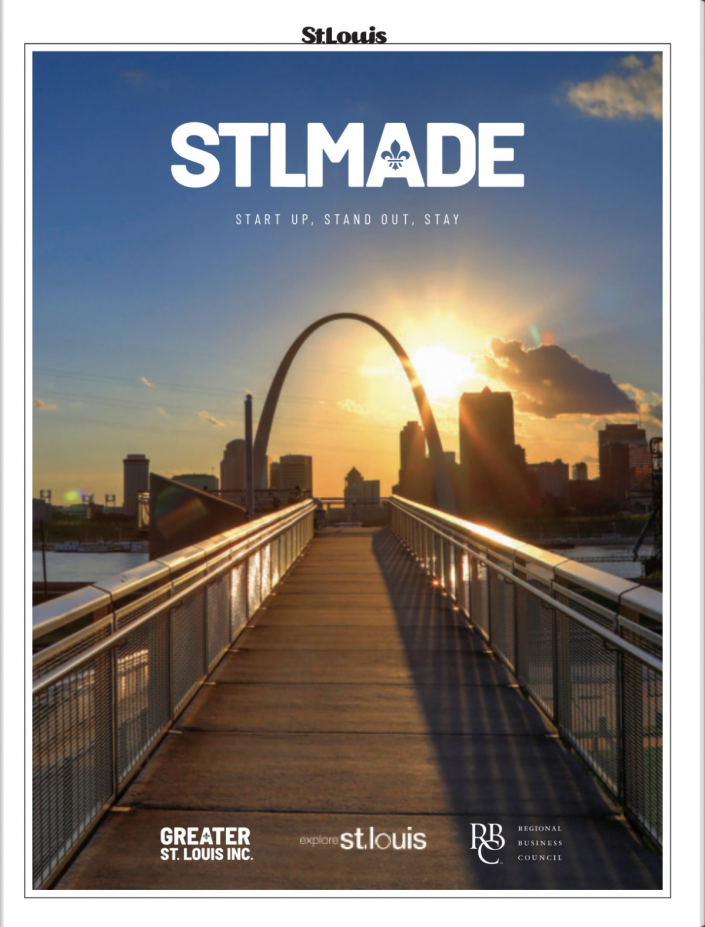