By Alecia Humphreys, The STL | November 2021

Geneoscopy is a BioGenerator portfolio company

With Geneoscopy, Erica Barnell is looking to change the game of colon cancer screening and ultimately, save lives.

According to the American Cancer Society, approximately 40 percent of the population fails to get screened for colorectal cancer — the third most commonly diagnosed cancer and the third leading cause of cancer death in both men and women. However, Erica Barnell has set out to shift that staggering statistic by reshaping the future of colorectal screenings (and from right here in St. Louis).

“I was still in medical school, doing a lot of clinical rotations and treating patients in the hospital, and I came across one individual who was just over the age of eligibility for screening at that time, and she presented to the hospital with late-stage colorectal cancer,” recalls Barnell. “I just remember thinking, we live in an era where we can sequence the human genome in 24 hours, and we can provide precision medicine to patients based on their genetic sequencing — why can’t we provide molecular diagnostics for people like this woman, who couldn’t afford to take the time off work and who was scared to get a colonoscopy?”

Seeing that need for noninvasive colon cancer screening options firsthand, while also having experience with noninvasive techniques through her lab at the Washington University School of Medicine, pushed Barnell to pursue this project.

“I went to John Burroughs High School, and then I subsequently went to Cornell University for my undergraduate career, and every summer I would come back to St. Louis and work in one of the large microbiome labs at Washington University,” says Barnell. “We were looking at children in Africa; they had a nonspecific gut inflammation disease called environmental enteropathy. My research task was to try to identify which children had this disease using noninvasive techniques. We developed this really amazing technology to isolate RNA biomarkers from stool samples.”

Reviewing this research made Barnell realize that the technology could also be used in other areas.

“I went to my principal investigator and said, ‘We can do this for colon cancer or irritable bowel syndrome or inflammatory bowel disease,’” says Barnell. “He said, ‘Yes, but that’s not my area of expertise or interest, and I’m not an entrepreneur.’”

Once Barnell matriculated into the MD, Ph.D. program at Washington University, she took the knowledge of that technology and co-founded Geneoscopy — a diagnostics health care company that specializes in ways to noninvasively monitor, diagnose and treat gastrointestinal disease.

Barnell, her brother Andrew Barnell and another Washington University student, Yiming Kang, launched the company in 2016, and shortly after, moved it into the Cortex Innovation Community. There, the Geneoscopy team was able to perfect its sample extraction technique and generate strong preclinical results for the accuracy of its colorectal cancer screening test.

“Colorectal cancer is the third leading cause of cancer related deaths in the United States, but it’s probably one of the most preventable cancers that we have,” says Barnell. “It takes 10 years for a lesion to go from normal tissue, to small polyp, to large polyp, to advanced adenoma, to colorectal cancer. The biggest roadblock in preventing it is that patients are really averse to existing screening options like colonoscopy.”

A colonoscopy is the current primary modality for colorectal cancer screenings; primary care physicians recommend their patients go get a colonoscopy after they reach 45 years of age, but only 50 to 60 percent of patients follow through on that recommendation.

“It’s invasive,” explains Barnell. “You have to take time off work and you have to get sedated, so you have to have someone drive you there and drive you home. So it’s just a big burden for a lot of people who are working, who have kids or who don’t want to go to the hospital.”

Geneoscopy’s lead diagnostic development, which is currently undergoing its FDA clinical trial, will solely require patients to submit a stool sample for colon cancer screening. Geneoscopy scientists then separate the sample into an RNA component and a hemoglobin component. The company’s technology reads the RNA concentration, hemoglobin concentration and pulls in the patient’s accompanying demographic and personal information. From there, it goes through an algorithm that produces a score on a scale of zero to 100.

“If the score is above our threshold, it’s a positive and if it’s below the threshold it’s negative,” says Barnell. “A positive would indicate the presence of colorectal cancer or advanced adenomas, which need to be removed via colonoscopy.”

In which case, of course, Geneoscopy would direct patients to pursue the path of a colonoscopy.

“We don’t want to replace the colonoscopy,” says Barnell. “Colonoscopies are such a wonderful tool to be able to resect lesions that could ultimately become cancerous, so we definitely want to make sure that the people who have lesions are going to receive a colonoscopy. But for patients who are unwilling or unable to have the more invasive procedure of a colonoscopy, we want to provide them with a really safe and effective alternative.”

And that alternative option can be done in the comfort of your own home, with the convenience of online ordering, tracking and updates via the user-friendly Geneoscopy patient portal, something Barnell was passionate about designing.

“I get so frustrated that aspects of health care are the same as in the ’70s with fax machines and pagers,” shares Barnell. “We need to come into the modern age of digital health. This is one way that we’re hoping to help with that process.”

And it’s the technology that Erica Barnell credits to Geneoscopy’s creation.

“I feel really fortunate that we stumbled upon this really amazing technology,” says Barnell. “Ten years ago, using RNA biomarkers and stool samples was really not feasible because the technology just didn’t exist. But we’re seeing now with the new RNA-based vaccines — a lot of technology has been developed in the RNA biomarker space. The combination of creating this infrastructure to help patients get colorectal cancer screening, in combination with a very informative biomarker, has made a really amazing value proposition for patients in this space.”

And considering Geneoscopy has successfully secured $113 million in funding to date, funders agree. The company’s progress shows no signs of slowing, either: they received an Arch Grant in 2016, they now have 35 employees, and in September 2020, Geneoscopy’s growth necessitated the move to an 11,0000-square-foot facility in Maryland Heights. They also received breakthrough device designation from the FDA, with the goal of being on the market at the end of 2022.

“I feel that I always wanted to be in health care and in business, and at a young age, you think about Silicon Valley and you think about the Boston area — the powerhouses — and I wasn’t entirely sure that the infrastructure existed here in St. Louis to support the aspirations that I had,” says Barnell. “But what they’ve done in the Cortex District over the last 20 years and what they’ve done in terms of supporting entrepreneurship, providing funding, just the support that they’ve built has made that dream possible. 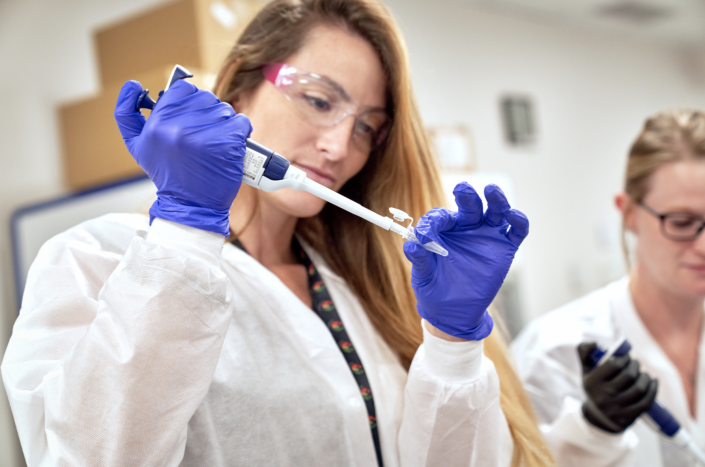