Science Coach is a program of BioSTL

Jackson Senior High School went from three students entering the Southeast Missouri Regional Science Fair in 2019, to being one of the top schools the next year with 31 students participating and 17 projects submitted.

This year, the district has 14 projects by 14 students submitted to the virtual fair this month, the numbers down because of the challenges of the pandemic and recent winter weather.

While the pandemic put a temporary halt to the JHS science program's growth after the fair in March 2020, students and science teacher at JHS, Leanne Thele, have made efforts to keep it going.

Junior Reagan Newell wants to become a dentist, so she centered her project around teeth. Newell was able to measure the effect of sugar, specifically skittles, on the enamel of human teeth with a specialized tool from Dr. Dana Cotner's office in Cape Girardeau.

Cotner has been Thele's dentist for more than 20 years. Through their connection, Cotner agreed to let Newell use a supply of extracted human teeth and the tool from her office.

"This is giving me a head start [for college]," Newell said about her project.

Senior Mallorie Coffee is continuing her research into avoiding the problem of antibiotic resistance by testing her chemical-based treatment for strep throat in a specialized lab at Southeast Missouri State University with the help of a professor.

She is one of three seniors, all from JHS, selected by St. Louis-based not-for-profit, Science Coach, in October from a four-state region to be awarded a $1,000 research stipend for the projects they are submitting for the upcoming science fair. All three seniors were the only recipients of the selective stipend.

Another one of those seniors is Elijah Jones, who also works in a lab at Southeast to further his work on Limbergin E, a compound with significant medical applications that help fight disease in developing nations, and he is creating a catalyst that will streamline the molecular synthesis process.

Jones was one of those three students to enter the science fair in 2019. He said that finding and then funding a project can be difficult. Jones used hundreds of dollars of his own money to do science projects before he and Thele were able to find funding opportunities.

"I want to give every student equal opportunity," Jones said when speaking about students who want to work on science projects. That's partly why Jones and Thele did a lot of research in 2019 to advance the science program at JHS in 2020 and 2021 so more students could participate.

Thele said that after she attended the International Science fair in Arizona with Jones and another student in 2019, they were especially inspired by what other people and schools were doing. After that, they created the Science Club and a National Science Honors Society at JHS, and saw an increase in student interest in science beyond the classroom requirements.

"The goal of us doing any of this is to get more students to go into the STEM field because we are lacking people going into the STEM career system and college programs. And when you do hands on research, you kind of get a really good taste of what it's like to be in a lab, do your own work and kind of see what the potential is out there," Thele said.

Coffee said Thele is "the ultimate support system" because she helps students in any way she can. Coffee said she makes sure students hit checkmarks on their projects, finds applicable programs and scholarships, reviews applications, coordinates with outside sources and more, all on top of teaching.

"She's the superstar," Coffee said about Thele, who has taught for 25 years, only the latest three at JHS.

"We just want to grow this every year," Thele said. 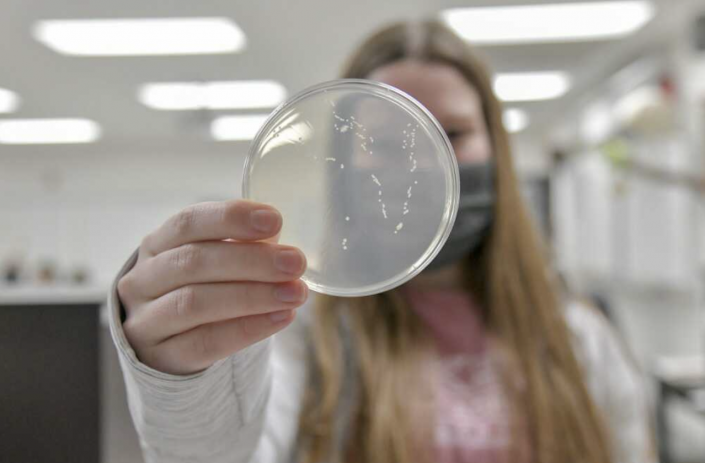