On TV: GlobalSTL is Engaged With Companies Worldwide to Expand the St. Louis Innovation Economy

BioSTL’s mission is to build an innovation economy for the St. Louis region. The nonprofit’s GlobalSTL arm is actively recruiting high-growth international companies.

“To make St. Louis a magnet for top global innovation that is coming to the United States but doesn’t think about St. Louis as a place to go and do their business,” said Vijay Chauhan, Lead for GlobalSTL, a division of the nonprofit BioSTL. “For us to build a successful innovation economy, we need to be globally connected. And if you’re on the East Coast and the West Coast, you’re just naturally globally connected. But here in the Midwest, we have to take a very deliberate effort.”

The GlobalSTL mission is to bring competitive advantage to regional corporations, research institutions and universities.

“The areas we chose were the areas where we have significant strength as a region,” explained Chauhan.

“If you line up all the healthcare organizations that are headquartered in St. Louis – BJC, SSM, Mercy, Centene, Express Scripts – all of these folks, they have combined revenues of about $360 billion. That’s more than Boston, Cleveland, Philadelphia, Chicago Nashville, you name it,” he said. “We have more buying power that they want to access.”

Chauhan described the concentration of buying power and research capacity in St. Louis in areas of agriculture and food.

“It makes us really privileged to be an ag/food powerhouse. But nobody was telling our story. I go to Israel, Ireland, Netherlands and those innovators all want to go to Boston, Silicon Valley. In five minutes, when I tell them what we have in St. Louis, they said ‘We’re ready to get on a plane, Vijay, if you can put us in front of these major corporations,’” he said.

“And we are only interested in the best innovation. Why do I want that? I want St. Louis corporations to be the acquirers, not the acquired.” 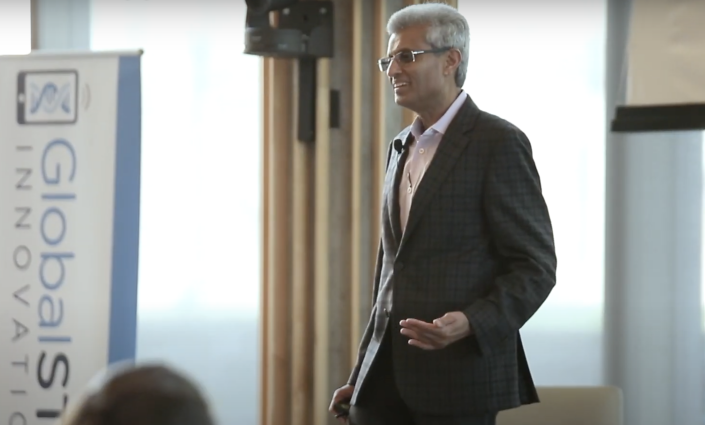