Among the many threats it monitors, the Pentagon is worried about rubber.

It needs the natural stuff, from rubber trees, for aircraft and truck tires. Synthetic rubber doesn't perform as well. If the Asian nations that produce 90% of the world's latex should ever be hit by the same fungus that severely limits production in South America, the supply of this essential commodity would be in danger.

That's why the Defense Advanced Research Projects Agency, the Pentagon's innovation arm, is funding a Creve Coeur company that thinks it can produce rubber from sunflowers.

DARPA handed $225,000 grants in 2019 to three companies, each targeting a different plant that produces a small amount of latex. Edison Agrosciences grew sunflowers while the other companies researched dandelions and a desert shrub called guayule.

The agency decided sunflowers looked the most promising, so Edison recently won a $1 million second-stage grant to continue its research. “Edison Agrosciences had really proved their concept and we saw a lot of value in what they were doing,” DARPA program manager Blake Bextine said.

It helped that sunflowers are already a widely grown crop, so the agricultural industry wouldn't need new systems to grow and harvest them. The key breakthrough, though, was Edison's work on the plant's genetics.

It grew 120 sunflower varieties in greenhouses at the Danforth Plant Science Center and found that their latex content varied from 0.2% to 1.8%.

The high end of that range is still a small number, but Edison scientists also determined which genes control latex production. They haven't actually boosted the plant's rubber content yet, but they've shown how that can happen through gene editing and predictive breeding.

Edison was founded in North Carolina in 2013 and moved to St. Louis three years later after BioSTL's investment fund, BioGenerator, led an $800,000 investment round. David Woodburn, who had been a BioGenerator entrepreneur in residence, became chief executive in 2018.

He was quickly convinced that the company had moved to the right place. Edison has been able to collaborate with the Danforth Center, hire a Maryland Heights firm called MOgene for genetics work and share an expensive piece of equipment with another BioGenerator-funded startup. Edison also won a $50,000 Arch Grant in 2019.

“There are great resources in Raleigh-Durham, but I was here and I felt the ecosystem was superior here for plant biotechnology opportunities,” Woodburn said.

Edison also got local help in pursuing the Pentagon opportunity. Harry Arader, director of BioGenerator's entrepreneurial programs, had sought a DARPA grant for another firm, and suggested that the same agency might be interested in Edison's research.

“It occurred to me that if anyone was interested in natural rubber from a sunflower, it would be the military,” Arader said. “The army literally rolls on rubber.”

The success in landing the initial DARPA grant helped convince BioSTL to create something called the Center for Defense Medicine, which won its own $1.5 million federal grant last year. “The lessons we learned from helping companies like Edison, we're now trying to systematize so we can create synergies and economies of scale,” Arader explained.

The DARPA grant funds Edison's research for two years. If the company can increase the plant's latex content, Woodburn said, it should have no trouble raising more private capital.

Even if all goes well, Edison is several years from commercial-scale production. But with the military eager to diversify its sources of a vital commodity, those golden-headed flowers look like a golden opportunity. 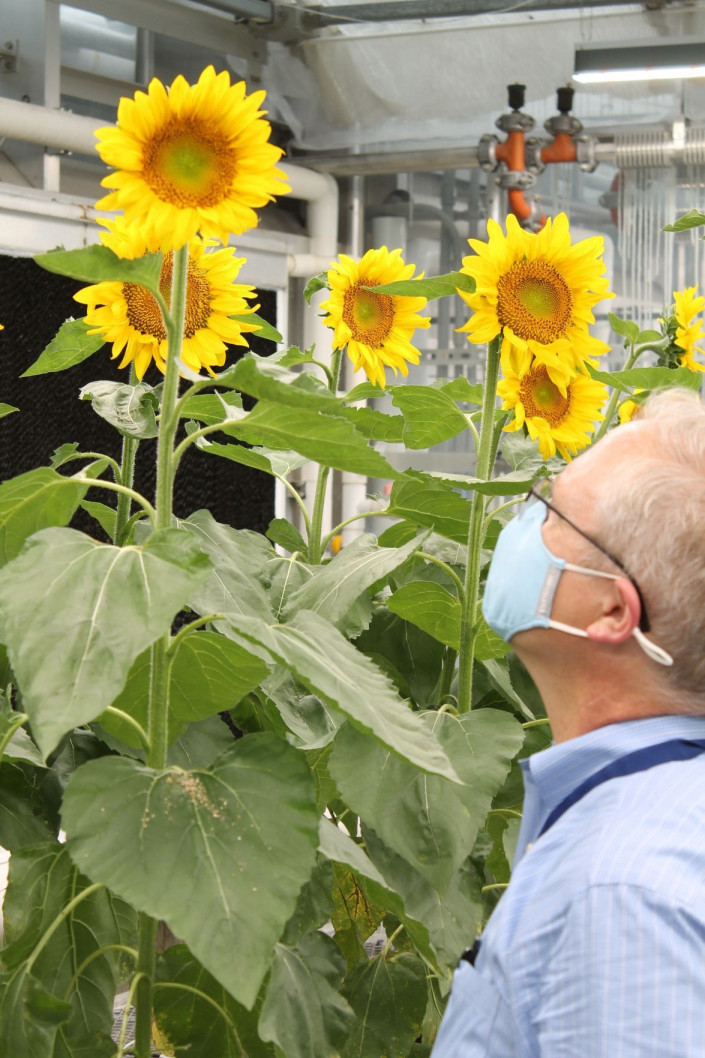