Food & Wine: St. Louis is the Next Great Food City

After launching our editors' picks for the next big food cities, we wanted to hear from our readers. We put the call out on our social channels and Buffalo, New York and Auburn, Alabama got plenty of support, but it was St. Louis that our readers love the most.

In recent years, the rest of the country has begun recognizing St. Louis as an essential Midwest culinary destination, offering a food and dining scene impressive in its caliber, expansive in its diversity, and uncommon in its breadth. We consistently rank as one of the leading cities in the United States in the number of independent restaurants per capita.

To believe St. Louisans are simply average food enthusiasts, sharing the same level of engagement and knowledge held by diners throughout the rest of the country, would be a profound underestimation. Odds are that the couple that was just seated at table 12 follow the restaurant's insta account, the chef's twitter feed, and probably have a pending request to be facebook pals with the bar manager. They've read the reviews published by each of the city's five popular dining publications, and know what their favorite food blogger ordered when she visited two nights before. We are engaged and informed, internalizing an immutable pride, knowing just how outstanding a food city St. Louis is.

One of the reasons we unabashedly adore our food and dining scene is that we worked hard for it. St. Louis diners have been looking inwards for a long time. We've enjoyed watching the progress and growth happening all over the city and county. It used to be that the dining community seemed to believe that success meant keeping pace with cities that have eight times the population. But with the increase in national media attention, and recognition by powerful institutions like the James Beard Foundation of the profound impact that St. Louis chefs, Kevin Nashan and Gerard Craft (both best chef midwest winners) had on reimagining the future of St. Louis cuisine, we have matured, confident that what we have in our own neighborhoods is not only significant and of quality, but also relevant and forward thinking. Culinary accolades are abundant not only for our veteran chefs. Nick Bognar's iNDO was the talk on everyone's lips both locally and nationally, when the deft, masterfully sound, and slightly rascally, sushi chef opened his debut in Botanical Heights. And the city is going to pass out soon as we hold our breath waiting for his sophomore sushi spot, SADO, to open this fall.

The evolution and growth of our dining scene is given the momentum to make such huge strides because of the innovators that have been so influential and taught so many future chefs how to thrive. At Louie, the level of skill, experience, and mastery exists in every aspect of the restaurant. With such talent, they could be as esoteric and egoistic as they wanted, every night a different experiment, and the city would likely happily bend towards them. Instead they offer a menu of the most superlative, stunning, and delicious preparations of modest dishes. The only local who might not agree that Louie's roast chicken is the best in the city is probably a transplant. David Choi ushered in an appreciation and popularization of Korean food through his food truck, Seoul Taco, years before either were common to the STL. Today we have to share his talents with our sister state of Illinois, as his Seoul Taco empire stretches into Chicago.

And when Tara and Michael Gallina welcomed St. Louis diners to their restaurant, Vicia, five years ago, you could feel the cool breath of renewal and growth brush across your neck. The impact they had on changing the way this midwestern city perceived the importance of meat to the promise of vegetables is significant. With the recent addition of executive chef and partner, Aaron Martinez, Vicia will continue to be a guaranteed leader in how locals eat.

Keeping pace with the extraordinary culinary scene is an equally impressive cocktail culture, grew and evolved together. Like the best sort of couple, the two branches of hospitality matured and expanded simultaneously, one making the other stronger, each inspiring their other half, pushing it to be better. Planter's House, owned by bartender and restaurateur Ted Charak, along with the STL's doyen of craft cocktails, Ted Kilgore, and his wife, bartender Jamie Kilgore — the best sort of couple themselves — opened on repeal day in 2014. It was immediately evident that the stunning new bar serving an extensive menu of seemingly flawless, original, and historic cocktails, wasn't simply keeping pace with the best bar programs in the country, it was setting a new industry benchmark of excellence. Education and mentorship are both tenets of the Kilgore's, resulting in a city populated with gifted and inspired young bartenders who learned at their side.

Platypus, the cocktail and small bites bar located in the South Grand neighborhood, is smart and cheeky, while also achingly sincere. Owned by bartending veterans Tony Saputo and Meredith Barry, the small, constantly changing menu of cocktails are deeply personal and constructed like a short story — each component a character with a role to be played. Duckbill, the service counter small bites restaurant located inside Platypus, headed by chef Grant Heman, offers a variety of finger foods to be paired with a variety of dipping sauces that will set your flavor buds all atingle.

Covid forced restaurants to lay off valued and skilled staff, as well as derailed and delayed business plans. Some of our most talented local chefs found unique ways to be resilient and resourceful, all sharing one common goal — to find ways to offer their food and hospitality to a community hungry for delicious and unique experiences. Forward thinking food entrepreneurs like The Fattened Caf, whose Filipino barbecue and smoked meats are profoundly flavorful, multi-dimensional and heartfelt, scheduled regular pop-ups that proved to be wildly popular. The masterful Omakase chef, Heidi Skye Hamamura, known for her stunning sushi and sashimi presentations, launched Taberu, offering custom trays and a curated selection of dishes to the public. Chef and baker Ben Grant, launched 4PlexDining, selling a seasonal selection of his masterful sweet and savory creations including a jaw dropping shishito, caramelized onion and Manchego cheese galette, and a chocolate chip cookie which you would likely fist fight a beloved family member for. In November of last year, chef Chris Bork, Caitlin Franz, and Joe Mooney debuted Place and Time, an intimate, monthly, underground dinner series. Each of the curated evenings are a sort of gastronomic memoir. The team of three are adept storytellers, able to capture and recreate a specific zeitgeist through food, cocktails, wine pairings, and ambiance all communicated with warmth and gracious hospitality. The intimate 14 person dinners have been selling out within minutes of being announced on social media, and their popularity continues to grow.

Ask any food lover in St. Louis, what new restaurants they are excited for, and you will likely be listening for a while. You could almost hear a collective cheer ring across the city when news recently broke that the Take Root restaurant group (which also includes Vicia) would be re-opening the beloved French Bistro, Bar Les Freres in Clayton, whose future had been precarious since closing during covid. But maybe what you heard was the echo from the happy shouts coming from Maplewood residents who learned that Laotian restaurant Han Lao, which also shuttered during covid, was reopening in the downtown district. The talented group responsible for the wildly clever restaurant which harmonizes technical precision and artistic grace, The Lucky Accomplice, caused quite the commotion when, earlier this year, they started dropping hints on their social media about Press. The new sandwich and craft cocktail eatery will offer a cast iron pressed sandwich that chef Logan Eli devised during what must have been a most delicious fever dream. And we love to rally and support a local chef who traveled the world to hone their craft, before coming back to share their interpretations of all they experienced with the city that they will always call home. Chef Tony Nguyen packed his bags, leaving Crustacean on Rodeo Drive, to open the highly anticipated Snō by Tony Nguyen — a sleek, smart, restaurant rooted, but not bound by, Asian ingredients and technique. The prodigal son gets added bonus points for helping the STL culinary community gain another sharp, talented chef, his wife Jessica Nguyen.

You should come by for a visit. You should come by and bring someone with you who adores world class museums, the best baseball, and insanely good food. You will not meet a St. Louisan not eager to share what is happening in our restaurant community. We are ready to show the rest of the world that we are not followers, but influential forces whose chefs and restaurants and dining community are unlike any other in the world. "We're from the Lou, and we're proud." 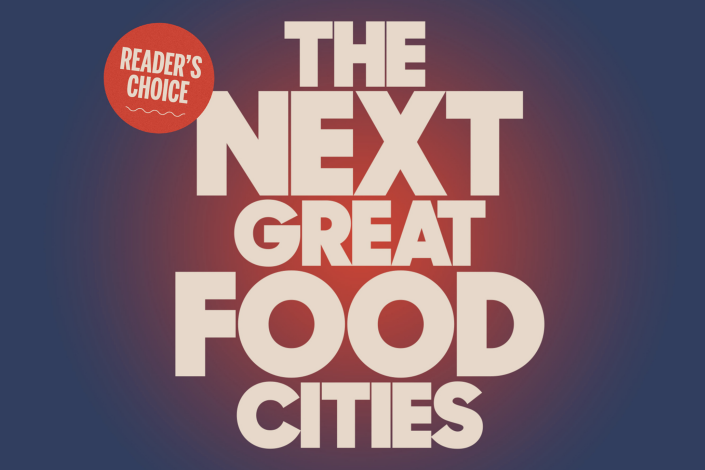