At Impossible Sensing in St. Louis, Pablo Sobron leads a team of scientists and engineers in building sensors to explore and study the deep sea and deep space.

Impossible feats rarely remain that way forever — they just require the right person with the right perspective and perseverance. Throughout his life, when faced with the seemingly impossible, Pablo Sobron has pushed through and made it to the other side.

It was a lesson he learned at an early age. As a kid growing up in Spain in the 1980s, he remembers dreaming of dedicating his life to space missions and exploration. There was only one problem: He was too tall to be an astronaut. (Shorter people make better candidates, as spacecrafts tend to be as compact as possible to manage costs.) Maybe he could never physically step foot on the moon or Mars, but he knew his dream was still possible.

“I was discouraged from pursuing that avenue, but that didn’t stop me from dreaming about space, exploring, and understanding those things in the sky — and asking, ‘Can we get there and learn more?’” he recalls.

Sobron eventually made it to outer space, but not as he imagined all those years ago — instead, it’s his technology that’s landed. As the founder, CEO and “sensing wizard” of St. Louis-based Impossible Sensing, Sobron oversees a team of scientists and engineers developing optical sensors to explore and study deep space and the deep sea. In just a few years, Sobron has grown his startup to a staff of 13 full-time scientists, engineers and creatives.

Earlier this year, Impossible Sensing gained widespread attention for its work with the NASA rover Perseverance, which touched down on Mars on February 18, 2021, with two pieces of Impossible equipment in tow. Sobron and his team watched the landing intently — it was the sum of years of work and experimentation — but then their new phase of work began. The Impossible team is analyzing and interpreting the rover data they receive from their equipment, in part, to help answer the question of whether Mars has ever sustained microbial life.

Exploring the red planet and beyond is only part of Impossible’s focus. Sobron is also creating technology to study the deep sea, considered the “final frontier” on Earth. This summer, Sobron, in partnership with NASA research scientist Laurie Barge, will launch the InVADER Project to study underwater hydrothermal systems funded by a NASA Planetary Science and Technology from Analog Research grant. InVADER will examine deep sea vents at Axial Seamount, the largest and most active submarine volcano on the western boundary of the Juan de Fuca Ridge, located 300 miles off the coast of Oregon.

“The technology itself, to put it in a simple way, it’s like a Swiss army knife of exploration,” Sobron says. “We’re using lasers to learn different things, including about elements like magnesium, potassium, manganese, iron, phosphorus… Things that both life needs to develop and thrive, but also resources that humans like to fuel the green tech revolution. We’re also looking for molecules; molecules are what make minerals. The third thing we’re looking at is: What is water’s role in all of this? All of the chemistry and all the equilibrium between these complicated reactions between life, between geochemistry, immunology, all of that is fueled or enabled by water. We’re looking at the system as a whole, not just bits.

“The innovation here, and I guess what makes this being the first and perhaps the most important observatory that we want to put down in the deep sea globally, is that we can do all of this with a single instrument that can analyze all of these things at a distance,” Sobron adds.

For Sobron, the work is fulfilling a childhood dream, but also a journey he began some 17 years ago while studying physics at the University of Valladolid in Spain. “That was always my north star — studying and learning,” he says. In 2004, while Sobron was still in school, a discovery on Mars just so happened to collide with his path at the time. The NASA Opportunity rover discovered jarosite, a mineral that can only form in the presence of water, on Mars, proving that water has existed on the red planet.

“The connection to me there was that the name jarosite is taken from a valley, a ravine, in Spain, the Jaroso Ravine,” Sobron says, “So suddenly, four or five hours from where I was studying became a world class lab to study this mineral and the water where it comes from.”

Sobron was fascinated by the discovery and determined to, “contribute something to the search for life in the universe.” That passion led him to pursue his doctoral degree in physics, which was funded by a grant from the Spanish Astrobiology Center in Madrid and entirely research-based, including intensive on-site field research in the Jaroso Ravine.

“I discovered that doing work on-site, in the field, I didn’t have the instruments that I needed to really understand the problem to the level that we could have answers that we can extrapolate to Mars,” Sobron says. “I would take samples to the lab for analysis and then go back home — a five-hour drive, so not too far, but far enough that when I opened the samples, they looked different — a different color, different smells.”

“When we take samples from the field, from an environment, they change quickly,” Sobron continues. “They transform with different temperatures, different humidity. It was a very frustrating experience where I could only do very tangential proxy science with those samples back in the lab. I decided that I was going to have to bring the lab to the field to avoid all these problems. But in 2005 and 2006 there were no tools to do what I wanted to do in the field.”

Sobron’s work led him to shift the focus of his Ph.D. from scientific work with external technologies, to building technologies to explore, “new science,” as he describes it. “I was lucky enough to make the choice to study physics, because I learned enough about optics, electronics, mechanics, and programming, that I could basically take lab instruments the size of a small bathroom and shrink it to the size of a shoebox. I knew enough, but I couldn’t do it by myself.”

Around the same time that he was having this revelation, Sobron’s university won a contract (partially based on designs he had developed) from the European Space Agency to build the first laser Raman spectrometer for the ESA’s ExoMars mission. Sobron built the initial field prototype for the spectrometer, and next summer, it will finally fly to Mars. Through his various studies and experiences, Sobron befriended scientists at NASA and across the U.S., including Professor Alian Wang at Washington University in St. Louis.

“She’s involved in the NASA Mars missions, Spirit and Opportunity, and she said, ‘When you finish your PhD, what are you doing? Why don’t you come to St. Louis; we have Mars mission work with the next wave of instruments and moon science,’” Sobron recalls. “And I said, ‘I’m in.’”

In 2008, Sobron accepted a postdoctoral research associate position at Washington University — but it would be another eight years before he put down more permanent roots here with Impossible Sensing. In the interim, he worked as a visiting fellow at the Canadian Space Agency and later as a research scientist for the SETI Institute in Silicon Valley (co-founded by Carl Sagan), where he still maintains a working relationship.

He was building an impressive career and doing work he loved — and work he knew was making an impact — but Sobron still felt something was missing. He thrives on developing new ideas and technologies, but as he learned while pursuing his Ph.D., he wants to find faster, more efficient ways to innovate and explore space and the deep sea. By 2016, the idea for Impossible Sensing was percolating.

“I’m a quick thinker, and I want to get things done quickly, or else I find something that’s even more interesting and jump into that,” Sobron says. “I was finding that I was unable to… really exploit that capability to the full extent of what I thought I could do, and that’s when I came back to St. Louis and started Impossible. I found that combining the ability of an agile startup with the resources that I could bring from my previous life at NASA, I could really build a team to accomplish what I wanted.”

When considering where to found his startup, Sobron had plenty of options, including strong networks in Silicon Valley and with the European Space Agency, Canadian Space Agency, and NASA — yet he chose to return to St. Louis, where the affordable cost of living and connection to Washington University’s NASA partnership could help anchor Impossible.

“Of all the places in the world that I lived, St. Louis offered me the most diverse array of characters in the sense of seeing different ways of life and the world,” Sobron says. “The arts and creativity we’ve found here, I see as a really key requirement for us to grow, but also the connections we’ve built with the community, like at Washington University and incubators like T-REX, Nebula and Cortex Innovation Community. I’m very committed to staying here because of the people and our personal connections in the community that will really make us succeed as a company.”

Fast forward to 2019, when Impossible was still a small, lean team of mostly contractors. Sobron realized that his model had made him, “a victim of my own success,” as he puts it. “I was taking on more work than I could develop and deliver eventually,” he adds. “That prompted me to hire my first person in April 2019, and right now we have 13 full-time employees.”

With a growing staff to help expand what’s possible at Impossible, Sobron is only that much more energized for what’s next. The startup is currently collaborating with Washington University on a NASA project to develop lunar resource utilization technology to gather data from the moon, in addition to its ongoing projects in deep sea and deep space.

Looking toward the future, Sobron is excited to continue investing in St. Louis and hopes to make the city a hub for space exploration and innovation. If that sounds unlikely right now, just remember — impossible feats rarely remain that way forever.

“What we’re trying to do next is really expand and become a magnet, an attractor, for people from outside St. Louis, from both coasts and other places, to really develop a key space exploration hub here in St. Louis under our Impossible mission,” Sobron says. “This is not to diminish the value that we see in talent in St. Louis; it’s quite the opposite. We could very well grow from within the city, but one thing I learned in the past is that keeping your growth from within your own frontiers is self-defeating. We want to bring new talent and bring the city new faces and new ambassadors for St. Louis toward the world.” 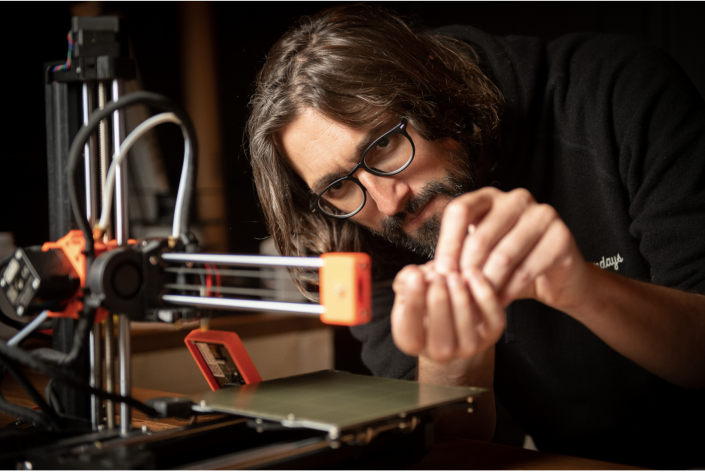