St. Louis, MO – August 3, 2022 – As previously announced by Bayer AG, a long-time strategic investor in CoverCress Inc. (“CCI”), Bayer has acquired a 65% controlling interest in CCI by purchasing all equity interests in CCI other than what is currently held by Bayer and CCI’s other strategic investors, Bunge Ventures and Chevron. CCI will continue to operate as a standalone independent entity. The announced transaction reflects a successful exit for CCI’s venture capital, angel and economic development investors and its founders.

Founded in 2013, CCI has developed a novel winter oilseed crop called CoverCress™ by converting field pennycress through sophisticated breeding and gene editing. CoverCress™ is a rotational cash crop which combines grain production with the environmental benefits of a cover crop. CoverCress™ is grown between a traditional corn and soybean rotation in the Midwest and the oil extracted from CoverCress™ grain is designed to achieve a low carbon intensity score that makes it an ideal feedstock to produce renewable diesel and sustainable aviation fuel. The meal extracted from CoverCress™ grain is a high protein product for animal feed.

“We have benefited tremendously since our founding from exceptional support from our academic, financial, and strategic partners. As is the case in any venture start-up, our goal has been to build the business using these resources as efficiently as possible to create a meaningful exit for early-stage investors and founders”, said Mike DeCamp, CEO and president of CCI. “Through the transaction with Bayer, we are very pleased to have achieved that goal.”

In addition to early investment by the venture arm of Bayer (formerly Monsanto Company) and a B-1 round investment by the venture arm of REG (now an affiliate of Chevron), CCI has received equity capital investment through its several financing rounds from San Francisco based Prelude Ventures, Kansas City based Fulcrum Global Capital, and these St. Louis based groups: BioGenerator, Hermann Companies, St. Louis Arch Angels, Missouri Technology Corporation, Prolog Ventures, Cultivation Capital Life Sciences, Helix Fund, and The Yield Lab. CCI has and will continue to also benefit from being part of the 39North agtech ecosystem including utilization of the best-in-class greenhouse space at the Donald Danforth Plant Sciences Center and lab space at BRDG.

“Based on the exciting concept of a new crop with the potential to improve sustainability in agriculture while also offering farmers a better bottom line, BioGenerator contributed early capital and management talent to CCI during its founding, and later led its first external round of financing,” said Charlie Bolten, Senior Managing Director of BioGenerator Ventures and previous CCI board chair. “Since those early days, the CCI team has done an incredible job delivering on that potential and is now poised to launch an important new product while early investors enjoy excellent returns.”

“We invested in CCI in 2015 and kept investing. This team has demonstrated some of the most efficient use of capital that we have in our portfolio. We believe CCI is an important company for helping Midwest farmers contribute to agriculture being more climate friendly,” said Mark Cupta, Managing Director at Prelude Ventures.

Earlier this year, CCI announced a commercial partnership with Bunge, pursuant to which CCI will supply CoverCress™ grain produced under contract with farmers to Bunge for processing, and a $26 million Series C-1 investment by Bunge Ventures and Chevron. This new commercial partnership created a dedicated farm-to-fuel supply chain for the low carbon intensity oil feedstock produced from CoverCress™ grain, confirming the value of CCI’s business and driving Bayer’s interest to expand its ownership in CCI.

“One of the reasons we initially invested was to help build a St. Louis based company. As CCI developed, their team, product and partnerships kept getting better,” said Rick Holton, Jr., COO of Hermann Companies and founding Partner at FINTOP Capital. “The end result with Bayer, Bunge and CCI all building this company in St. Louis is exactly what our city needs.”

“We hear a lot of pitches for early funding every year. CCI was intriguing from the first meeting. Because of the strength of the team, the potential of the business, and a steady progress toward commercialization, we invested in every round,” said Brian Kinman, Chairman of the St. Louis Arch Angels. The group of current and former business leaders, engineers, physicians, and scientists seed the St. Louis region's start-up ecosystem with earlystage investments. “We were impressed with how CCI focused on their mission and executed on tangible milestones, culminating in an outstanding return for our members. It’s truly a remarkable company, doing remarkable things for agriculture and the environment.”

CoverCress Inc. is an innovative startup company developing a new winter oilseed crop under the CoverCress™ brand. Founded in 2013, the company is converting the common winter annual, field pennycress, using plant breeding to improve yield and maturity combined with advanced gene editing tools to improve fiber and oil composition. CoverCress™ seed allows corn and soybean farmers to add a new crop into their rotation on existing land during winter, while offering the ecosystem benefits of a cover crop, including improved soil health and carbon sequestration. It generates farm revenue as a whole grain feed ingredient, or when processed, as a low carbon intensity oil for renewable fuel production, and as a high-protein meal for animal feed. Key development highlights include:

• 2018: Arvegenix changes its name to CoverCress Inc. as use of CRISPR enables company to apply gene editing techniques to improve the crop so that is no longer native pennycress

• 2022: Completed agreement with Bunge for off take of CoverCress™ grain to be processed into oil for renewable diesel and animal feed 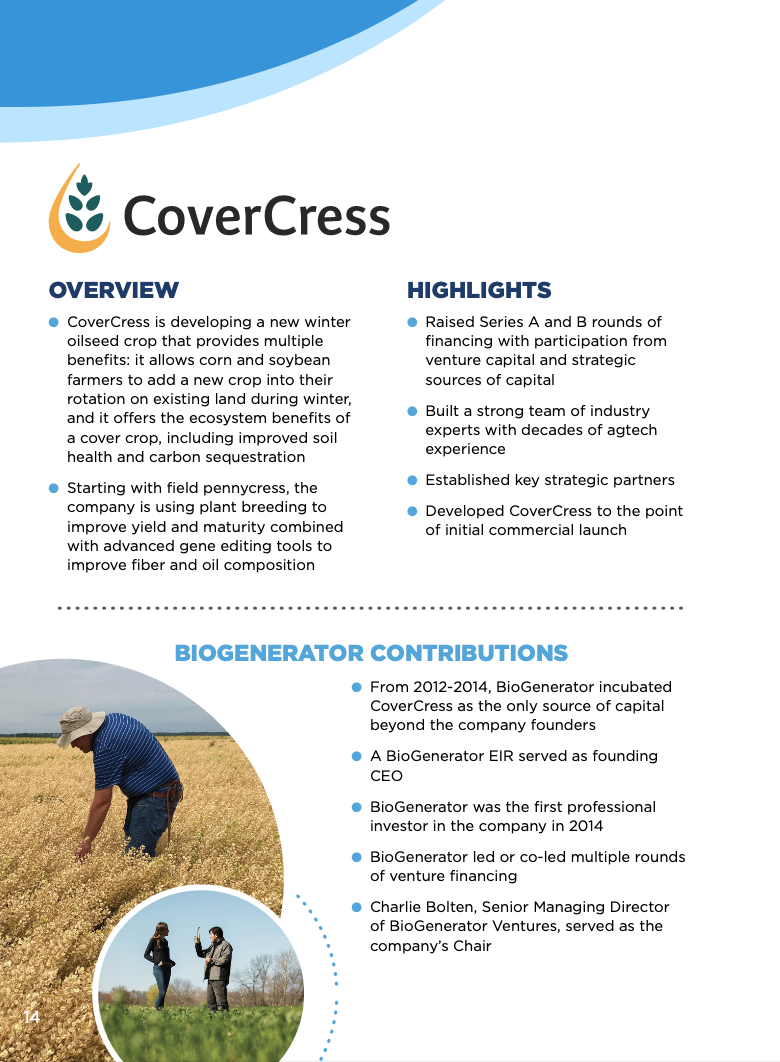 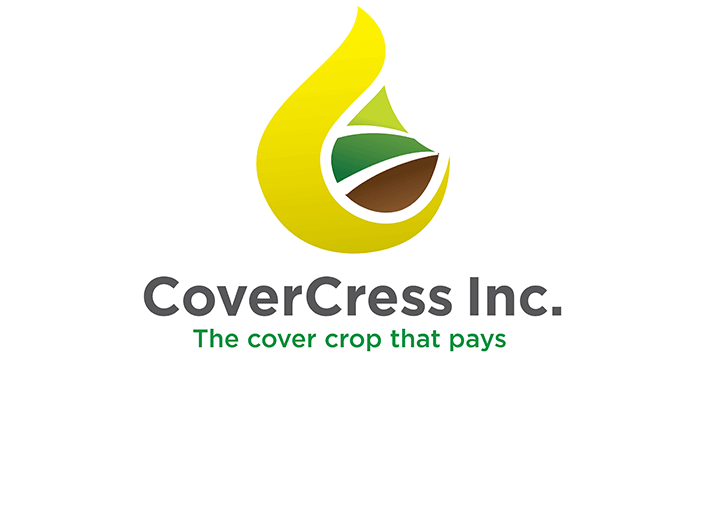