An Israeli publicly traded company with its North American headquarters in St. Louis opened an $18 million production facility Thursday focused on producing “alternative protein,” or plant-based substitutes that look and taste like meat.

Israel Chemicals Ltd., more commonly known as ICL (NYSE: ICL), is a global specialty-minerals company based in Tel Aviv with offices around the world, including its U.S. headquarters in Creve Coeur and a research and development laboratory in Webster Groves. With the opening of the new alternative-protein plant, ICL has reaffirmed its long-term commitment to St. Louis as its U.S. headquarters, company officials said in a news release.

The new 10,000-square-foot alternative protein factory will be the latest of the company’s factories at its 19-acre production campus at 8201 Idaho Ave. in south St. Louis' Carondelet neighborhood. At full capacity, the plant is expected to produce more than 15 million pounds of product each year, the company said.

The alternative-protein product has been under development by the company for many years and is patented under the name Rovitaris, officials said. The product will not be sold direct to consumers but will be marketed to food companies, distributors, restaurants and grocery chains to be branded as their own products. That follows the business model ICL has used with its other food products for more than 75 years, officials said.

The company distributes food specialty products to nearly every major food company and worked for years to develop an alternative-protein product to meet the growing demand among consumers for products that are healthier, plant-based and more sustainable for the environment for consumers worried about climate change, President and CEO Raviv Zoller said while in St. Louis to open the new facility.

The new plant will transform plant protein into fibers that have a meat-like texture and can be used in a wide variety of food applications to replace meat, poultry or seafood. The fibers are particularly notable for their flavor, natural texture and formulation versatility, the company said. The resulting finished product is all-vegan, allergen-free, kosher- and halal-certified and non-GMO. It also typically has less fat and sodium than comparable meats would, the CEO said.

“We’re bringing a whole new fantastic message to the world out here from St. Louis, which has done a few things in food and beverage in the past,” Zoller said. “We love the city of St. Louis, and we’re very happy with the campus and ecosystem here and the fantastic employees that we have.”

The factory will require a few dozen new employees to start and will grow from there, Zoller said. The company called the opening of the plant a “significant investment” that represents an expansion of ICL’s global food specialties portfolio to meet the demand for developing healthier and more sustainable products.

“This new facility will help meet the growing demand for innovative plant-based foods and meat alternatives – especially ones that deliver an eating experience similar to that of conventional meat products,” said Chris Millington, executive vice president of food and phosphate specialty products for ICL. “Food manufacturers are looking for meatless options that will offer sustainable, functional and nutritional value in the meat-alternative category, and we’re proud to provide them with a solution.”

Although the research and development behind Rovitaris has been underway for years in labs in St. Louis and elsewhere, the new St. Louis production plant will be the first facility of its kind to produce the product.

“It’s a result of many years of R&D and significant investment to reach the texture that mimics the feel that we like when we eat these types of meats,” Zoller said. “The end result is a lot of trial and error to reach a product that tastes good and feels good, and the best way to understand that is to actually taste it. We’re very proud of the products.”

St. Louis is a growing focal point of the plant-based foods sector, with companies such as Hungry Planet and Benson Hill producing new products alongside investments from corporate giants like Anheuser-Busch and Post Holdings.

“This is an exceptional investment in our region’s growing food and agtech sector and it highlights our increasing strength innovating to shape the future of the industry, including plant-based proteins,” said Jason Hall, CEO of Greater St. Louis Inc., the merged civic group of local economic development agencies. “With this investment and expansion in St. Louis from a global firm, ICL is demonstrating continued confidence in the St. Louis metro and showing why we are the strategic location of choice for innovators defining the next chapter of food and agriculture.”

The other production facilities at the Carondelet campus operated by ICL develop phosphates used in many common food products, including baking powder supplied to large commercial baking companies. A production line for potassium phosphates is used for electrolytes in sports drinks such as Gatorade and Powerade. Another line producing calcium phosphates is used to fortify food with calcium. A fourth existing production plant focuses on food brines. 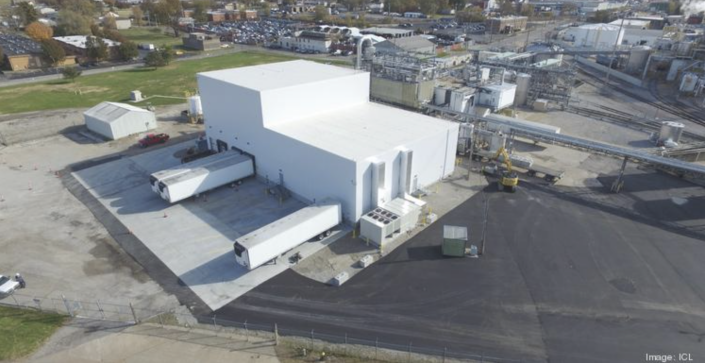