Benson Hill has planted its first crop seeds at its new Crop Accelerator, a 47,000-square-foot research and development facility located near its headquarters in Creve Coeur. The facility includes infrastructure to advance the agtech firm’s product development efforts.

Founded in 2012, Benson Hill, which describes itself as a "food tech company," has developed technology that uses data science, artificial intelligence and machine learning to help improve crop varieties with better accuracy, nutritional value and sustainability than traditional breeding methods.

Benson Hill said the Crop Accelerator gives it a “more than twenty-fold expansion in testing capacity” and is designed to utilize innovative imaging and automation technology to speed up its crop development process. Technology inside the facility includes growth houses and chambers, additive carbon dioxide, and temperature, humidity and lighting controls. Benson Hill co-founder and CEO Matt Crisp said the design and technology of the Crop Accelerator “unlock a pace of development we can’t otherwise achieve.”

Benson Hill said it planted the first soybean and yellow pea seeds inside the new facility Sept. 17. Those two crops are critical to the company’s ingredients division, which focuses on the fast-growing plant-based protein market by targeting development of new varieties of the yellow pea as well as production and commercialization of its proprietary soybean varieties. Ingredients is one of Benson Hill’s two major business units. The other is its fresh segment, which focuses on commercializing healthier fresh produce.

Crisp said he expects the Crop Accelerator to be a key facility in expanding Benson Hill’s product portfolio across its two divisions.

“It’s been constructed with a degree of flexibility that will allow us to work in a number of different protein crops as well as vegetables. These two categories of crops are significant areas of focus for us,” he said.

Benson Hill said development of the R&D facility was completed quicker than expected and under budget. While the company did not disclose a specific development cost for the facility, Crisp described it as a $20 million-plus project. BSI Constructors was the Crop Accelerator’s general contractor while architecture firm HOK designed the facility.

Benson Hill’s new Crop Accelerator was developed in partnership with St. Louis-based venture capital firm Lagomaj Capital, which has been an investor in the agtech firm. Founded in 2017, Lagomaj is led by 22-year-old Felix Williams and has an investment portfolio that includes more than 30 startups.

The opening of Benson Hill’s new Crop Accelerator follows its launch as a public company. On Sept. 30, it began trading on the New York Stock Exchange through a business combination with special purpose acquisition company Star Peak Corp II. 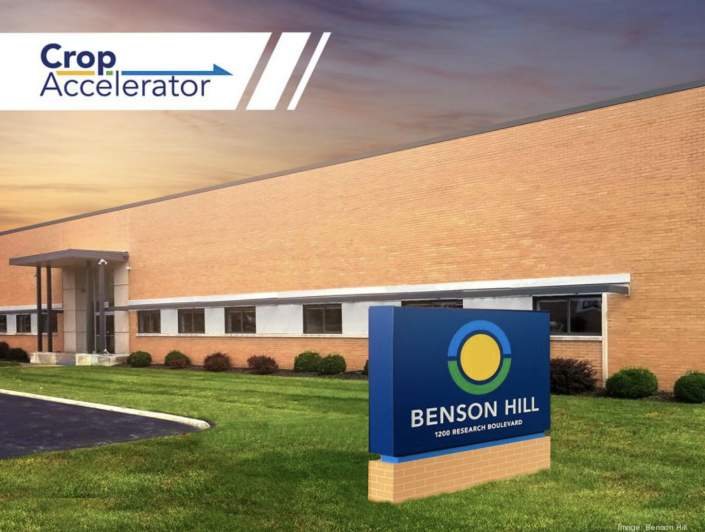